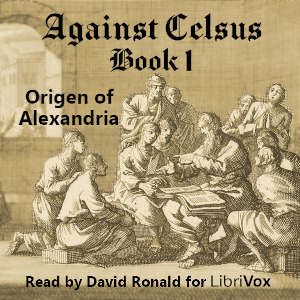 by
Origen of Alexandria

LibriVox recording of Against Celsus Book 1 by Origen of Alexandria. (Translated by Frederick Crombie.)
Read in English by David Ronald.
Against Celsus, preserved entirely in Greek, is a major apologetics work by the Church Father Origen of Alexandria, written in around 248 AD, countering the writings of Celsus, a pagan philosopher and controversialist who had written a scathing attack on Christianity in his treatise "The True Word". Among a variety of other charges, Celsus had denounced many Christian doctrines as irrational and criticized Christians themselves as uneducated, deluded, unpatriotic, close-minded towards reason, and too accepting of sinners. He had accused Jesus of performing his miracles using black magic rather than actual divine powers and of plagiarizing his teachings from Plato. Celsus had warned that Christianity itself was drawing people away from traditional religion and claimed that its growth would lead to a collapse of traditional, conservative values. Summary by Wikipedia.
For further information, including links to online text, reader information, RSS feeds, CD cover or other formats (if available), please go to the LibriVox catalog page for this recording.

Uploaded by librivoxbooks on February 25, 2021